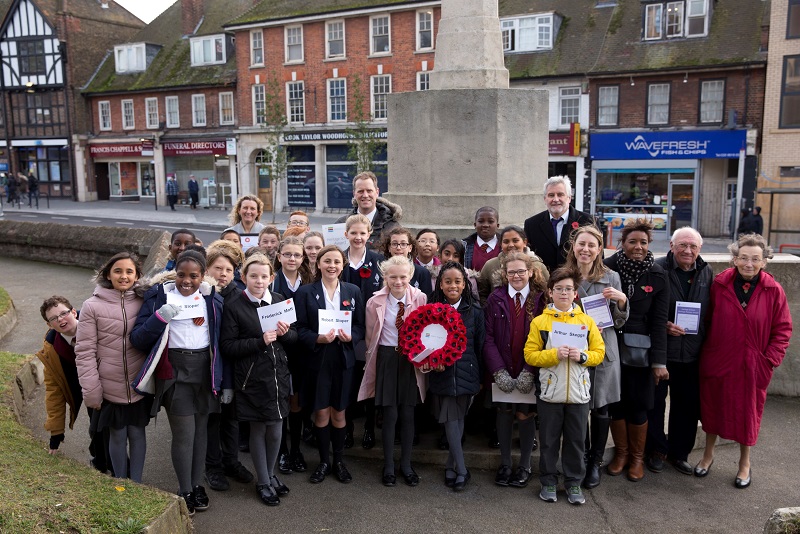 Pupils from Eltham Church of England Primary laid a wreath at Eltham War Memorial to celebrate its listing last week.

The proud event was also attended by the leader of the Royal Borough of Greenwich Councillor Denise Hyland, Councillor Denise Scott-McDonald cabinet member for Culture, Creative Industries and Community Well Being,   MP Clive Efford and members of the community.

The Year 6 pupils researched the lives behind the names on the war memorial that also appeared on their school roll of honour and worked on the application to Historic England for its listing to be considered.

The youngsters from the school in Eltham High Street worked with Margaret Taylor, a retired teacher and former archivist at St John the Baptist Church in Eltham, to research the names of former pupils who had sacrificed their lives for the nation.  Using newspaper articles from Greenwich Heritage Centre Archive and The Eltham Society newsletters they researched the history of the memorial and the men inscribed on it. They also carried out a condition survey of the memorial which is by the tower door of the Church of St John in Eltham High Street.   Working with Helen Spencer, HE Local Heritage Education Manager for the region, they decided to go ahead with an application for the memorial to be listed.

Eltham War Memorial is made of Portland stone, brick, granite and bronze. It stands in front of the tower door of the Grade II listed Church of St John the Baptist.

The Royal Borough of Greenwich has recently agreed a funding request made by Eltham councillors for £9,000 for the memorial to be restored and for the names to be re inscribed.

Joshua a pupil at Eltham CoE School, said: “We really enjoyed finding out about the pupils of Eltham who served and died in the war.  It was incredible to think that they were part of our school, and helped us realise the sacrifice that they made.”

Leader of the Royal Borough of Greenwich Councillor Denise Hyland said:  “We are incredibly proud of the work the children at Eltham Church of England School have done to protect this much loved memorial to the Eltham residents who died in the war a century ago.

“It means we can now ensure that those who sacrificed their lives for the nation can be remembered for many generations to come. Nearly 900,000 Britons lost their lives in the First World War and local war memorials are important reminders of those who bravely served from the community we live in.  The project provides a brilliant opportunity for young people to really engage with the history of their community and understand the value of their local heritage.”

Clive Efford, MP for Eltham said: “I congratulate the pupils of Eltham CoE Primary School for what they have achieved on behalf of our community.  As those who experienced war first hand pass on the duty of remembering, it is very important for young people to understand what they stood for and why it was so important.  What these pupils have achieved will be remembered for as long as the memorial remains, which will be a very long time.”

Tracy Stringfellow, the Chief Executive Officer of the Royal Greenwich Heritage Trust, said: “We are very happy that HE has chosen to list the Eltham War memorial which was laid in honour of the men of Eltham who died in the Great War. As the custodians of the memorial, we know this is a memorial very dear to the local and wider community. With the generous support of the Royal Borough of Greenwich Eltham ward councillors, we have been awarded funding to support works to the memorial which will see the names re-inscribed.”

Deborah Mayes, Head of Listing at HE said: “This memorial, will gain a place on the National Heritage List for England to tell the story of this country’s sacrifices a century ago and this will help ensure their future safety. It’s brilliant that schools are getting involved: all generations are taking a close interest in the centenary.

Carlie Silvey, Learning Officer for War Memorials Trust, said: “It is always a joy to hear when young people are involved in projects and activities linked to their local war memorial and take the first steps to becoming the war memorial custodians of the future. The trust is delighted that pupils from Eltham Church of England Primary School carried out a condition survey of their local memorial alongside their research into the names that appeared on it and their school roll of honour.  The First World War centenary is a fantastic opportunity for young people to engage with local history, especially war memorial heritage and we hope that other schools and youth groups will also take this opportunity to record the condition of their local memorial.”