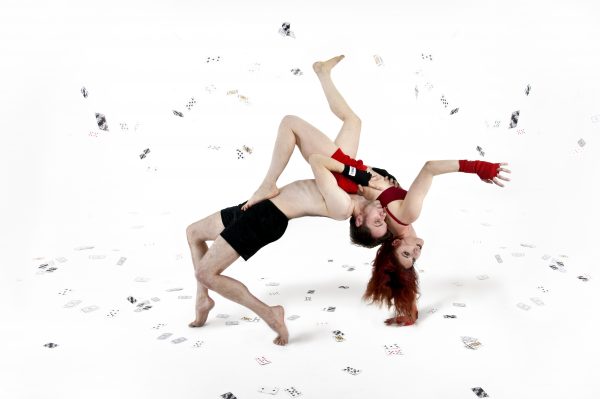 The Chantry Dance Company are returning to The Tramshed in Woolwich for two ambitious performances.

Ulysees Unbound centres around an astronaut who has left a dying earth in search of a new home. In a thrilling cascade of stunning characters, costumes and imagery, he witnesses the birth of a new star and finds himself on an alien world, populated by very alien creatures!

The Stacked Deck is dance which explores how we play a game.  Inspired by the concept of Game Theory and the theme of equality, ‘The Stacked Deck’ is based on a combative game of cards which four players are all desperate to win.

Each time a hand is dealt, the players are given a different scenario to face. How they chose to play their hand will determine the final prize.
Intense, raw and gripping, with the dancers radiating primal physicality, this ballet challenges us to look at how we all play the ‘game’.

Rae and Paul from the company, took time out of rehearsals to tell us about the ambitious production and what audiences can expect to see.

Performances are at The Tramshed, Woolwich on 6th and 7th October.  To find out more and to book, see the Greenwich & Lewisham
Young People’s Theatre website.