The Sunset Five at Greenwich Theatre 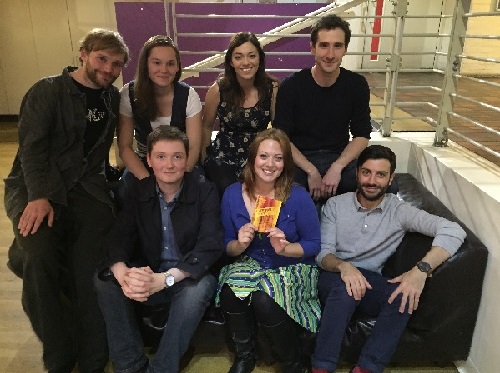 The Sunset Five at Greenwich Theatre

At The Greenwich Theatre, London

From the humble beginnings of a devised piece amongst peers to a hilarious comedic masterpiece, DugOut Theatre brought The Sunset Five to the Greenwich Theatre stage. Written by Tom Black and Sadie Spencer and directed by George Chilcott, The Sunset Five tells the tale of a pub quiz team of ‘ordinary misfits’ in Chipworth. Landlady Charley and her trusty accomplices race against the clock to save The Sunset pub from being demolished by greedy business tycoon Mickey….by staging a heist in Mickey’s casino.

Cue plenty of hilarity, innovative use of live music and instruments, an immensely clever script, razor sharp performances, and just a small dose of sympathy for the loveable Neil (who was a sandwich short of a picnic).

As an audience member, you could relate to the characters, which further boosted the play’s appeal. A simplistic set gave plenty of room for imagination, leaving the focus on the performers, and deservedly so.

I won’t give away the ending, but let’s just say it was a pleasant surprise.

A multi-talented cast of six with a natural gift for musicianship and comic timing. It’s no wonder this production was such a huge hit at this years Edinburgh Fringe festival. A laugh out loud comedy. I want to see it again already!

An excellent choice by Greenwich Theatre’s Artistic and Executive Director James Haddrell as part of its Autumn season 2015.

The Sunset Five runs until Saturday 19th September. Catch it while you still can! Book your tickets online.  You can also follow DugOut Theatre and The Greenwich Theatre on Twitter for more news and info.

Picture: cast of The Sunset Five