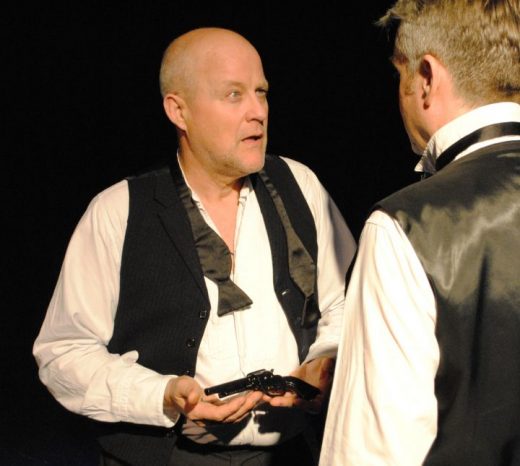 A familiar face is coming to Greenwich.

Actor Ian Sharrock, known to millions as Jackie Merrick from Emmerdale, is appearing in Raffles: The Mystery of the Murdered Thief, which is coming to Greenwich Theatre this week.

Ian plays Harry “Bunny” Manders, who is convinced that his erstwhile partner in crime, the gentleman cracksman A J Raffles, drowned while escaping a daring theft aboard a transatlantic liner.  But a chance reply to a newspaper advertisement reveals an entirely different scenario, and at once Bunny is embroiled again in his old life of burglary, mayhem, adventure and murder!

Ian Sharrock is hugely familiar to audiences from his ten years as Jackie Merrick in Emmerdale, while his other TV appearances include Heartbeat, The Bill, Casualty, Where the Heart Is and – perhaps most memorably – as Jed Maxwell, Alan Partridge’s biggest and most scarily obsessive fan, in I’m Alan Partridge, which has just been voted the funniest scene in any sitcom in a UK Gold poll of 100 top comedians!

Ian is back on the Greenwich stage for the third time and is particularly looking forward to a pint of the Chocolate Porter in the bar after he comes off!

Raffles: The Mystery of the Murdered Thief comes to Greenwich Theatre from Wednesday 15 – Saturday 18 March 2017.

To find out more and buy tickets, see the Greenwich Theatre website.