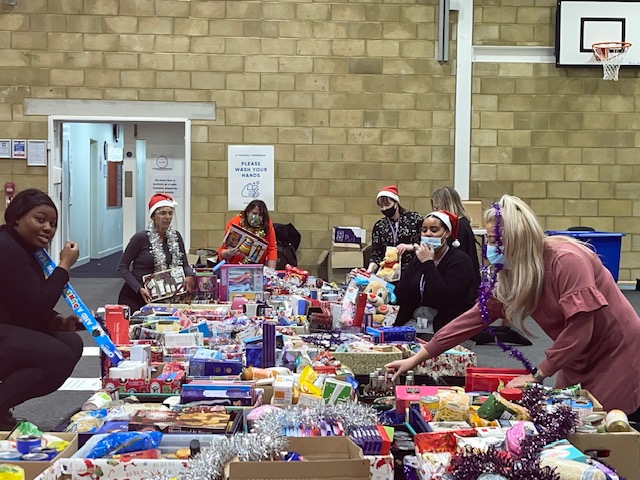 The Christ the King Sixth Forms Christmas Gift Appeal has been acknowledged by the Sixth Form Colleges Association (SFCA) at their annual awards.  The SFCA is the established voice of dedicated sixth form education and the hub of a national network of sixth form providers.  The awards celebrates and showcases outstanding practise in education for 16 -19 year olds, through a range of categories.  CTK were awarded the SFCA  2021 Community Impact Award, for making a special contribution to the wider community.

The Catholic Sixth Form group with sixth forms in areas of high deprivation, saw many staff, students, and their families disproportionally effected by COVID19.  Wanting to do something special to help the local community, CTK launched a Christmas Gift Appeal, encouraging locals to buy Christmas presents or to make a donation towards helping a local disadvantaged child and giving the gift of joy at Christmas.

Students and staff worked tirelessly to raise awareness of the campaign and to generate donations from the public, local business and supermarkets.  The Sixth Forms even held an art auction, with work donated by both staff and students, which raised over £1,000 for the appeal.

Shireen Razey, Principal of Christ the King Sixth Forms said: “We were delighted that CTK’s community work was acknowledged by the SFCA and we have been awarded the prestigious SFCA Award for Community Impact.  Social action is an important part of the work our Sixth Form College does, and our students strive to make a real difference to the local community.  Christ the King Sixth Forms work tirelessly to support charities and during Covid19 this has been more important than ever.  It’s great that we were able to make such a difference to those that have experienced real hardship this year”.