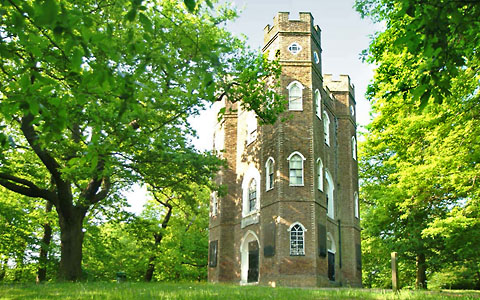 The Severndroog Castle Building Preservation Trust has received a £126,000 grant from the Heritage Lottery Fund (HLF) for an exciting project, ‘Securing the Future of Severndroog’, in the Royal Borough of Greenwich.

The project has been made possible thanks to money raised by National Lottery players and focuses on making Severndroog Castle, in Shooter’s Hill, a stronger and more self-sufficient organisation.

The Severndroog Castle Building Preservation Trust  was formed in 2003 by a committed and dedicated group of local community volunteers.  It was established as a limited company by guarantee and became a charity in 2008.

The Trust mobilised public support and prepared a successful alternative plan for public use of the building. It was granted a 30-year lease from the Royal Borough of Greenwich. Then in 2010 the trust was awarded a grant from the Heritage Lottery Fund for the physical restoration work and associated plans for public access, learning and engagement.  In June 2014, the Castle finally opened to the local community and the public once more.

Severndroog Castle is an 18th century, grade II listed Gothic style tower, on Shooters Hill. It is the only one of its kind in London accessible to the public and it is located in one of the last surviving parts of London’s Ice Age forest -The Oxlease.

The Castle has a number of associations – with famous as well as local people; the British Empire and East India Company; Ordnance testing and plane spotting in WWI and II. It takes its name from a battle at Suvarnadurg, on India’s west coast, in 1755.

It was built as a memorial to the battle’s victor, Sir William James, the commodore of the East India Company’s marine force. Lady Anne James, Sir William’s widow, commissioned the building just after his death as a memorial and museum dedicated to his career.

It is beautifully decorated and presented. Renowned for commanding panoramic views of London from its rooftop observation platform it is also becoming a popular venue for concert recitals, fairs, theatrical events and wedding ceremonies.

“We are delighted to receive this funding from the Heritage Lottery Fund and we are very grateful for their support.  Thanks to National Lottery players, this funding will enable us to develop the Castle in new and exciting ways and carry forward our ambitious plans with confidence.”

Stuart Hobley, Head of HLF London, said: “Severndroog Castle is a wonderful piece of Gothic eccentricity, perched on Shooters Hill and hidden amongst the trees of one of the last surviving parts of London’s Ice Age forest. This grant will enable the Trust to develop a sustainable future for this important 18th century monument, and we pleased that National Lottery players are able to provide this support”.