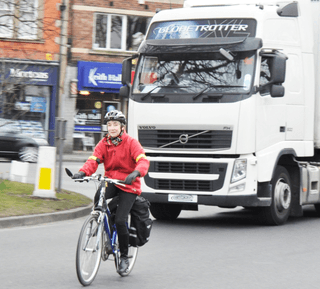 A ban on unsafe lorries driving in London has come into force.

Heavy goods vehicles (HGVs) must now be fitted with side guards to prevent cyclists being dragged underneath.

HGVs must also be fitted with a certain type of mirror to give drivers a better view of cyclists and pedestrians.

Mayor Boris Johnson said the scheme was a “life-saver”.

Each breach of the ban carries a maximum £1,000 penalty and repeat offenders risk losing their operating licences.

The new rules, covering all roads in London except motorways, and operating 24 hours a day, were announced after a number of cyclists were killed in road crashes in London.

Mr Johnson said a “disproportionate” share of fatalities and serious injuries were caused by lorries.

“We are ahead of any other part of the UK in closing the legal loopholes that allowed many HGVs to operate without basic safety equipment,” he said.