Rugby: Blackheath Cooke up plan to down Darlington Mowden Park 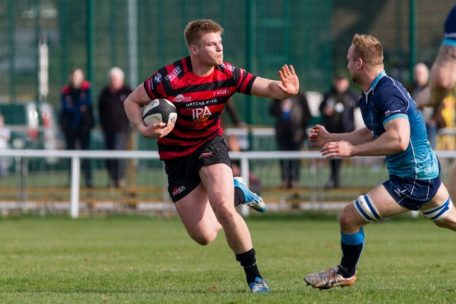 Rugby: Blackheath Cooke up plan to down Darlington Mowden Park

A first win in six outings for Blackheath, thanks to an opening 40 minutes superior to anything the Club have managed since the start of 2017.

Nevertheless, victory could only be celebrated after a spirited second half comeback from a physical Darlington Mowden Park side saw the visitors overhaul a 21-point deficit to draw themselves level, before the tide turned briefly once again and Freddie Owen’s late try gave the hosts maximum points.

Blackheath were in the ascendancy in only the third minute as an infringement enabled them to find touch close to the opposition goal-line, and as the Club pack drove forward, Park fly-half Gary Law came in at the side to concede the penalty try.

With the visitors temporarily reduced in number, the unfamiliar pairing of Simon Whatling at scrum-half, with Mark Cooke as his half-back partner, were able to dictate an open game plan on this fine spring afternoon.  Cooke also added some decent kicking to keep Park on the back foot, and on 18 minutes, despite untidy line-out ball, the fly-half made the line-break to put Leo Fielding across for the centre’s tenth try of the campaign for a 14-0 lead.

It wasn’t all one-way.  Alex Pickersgill had already been called upon to make one outstanding try-saving tackle as

Park scrum-half Tim Duchesne broke away, and now Jamie Davies was called upon for a repeat performance on blind-side Simon Uzokwe, but shortly before the interval Cooke sparked the move from deep, and Owen made the final off-load to send Pickersgill over for a third converted score.

However, Park had arrived at Well Hall in a decent run of form with three consecutive victories and, despite a yellow card for inside-centre James Fitzpatrick for a dangerous tackle soon after the re-start, started to find more possession and better continuity.

Initially the relentless tackling held the visitors at bay, but as Park’s big runners gradually wore the hosts down the gaps emerged and on 57 minutes Law found space to cross.  Uzokwe shrugged off numerous tackles to pile through the midfield soon after, and as second-row Tailite Vaioleti sent wing Adam Radwan across following a quick tap-penalty on their own twenty-two, Law’s third conversion brought Park back to parity in a spell of just eleven minutes.

However, almost before anyone could draw breath, Tom Stradwick and Adam Kwasnicki combined to claim possession from the re-start and with Markus Burcham delaying his pass just long enough, Owen exploited the tiniest of gaps to restore an advantage Blackheath clung on to until the final whistle.

National League One takes a break next Saturday, but Blackheath will be in action as they host Sidcup in the semi-final of the Kent Cup.  Kick off at Well Hall is at 1.30 pm.