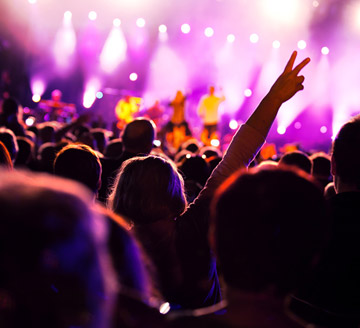 This year’s OnBlackheath was a huge success and planning is already underway for next year!

With a tweaked layout, this year’s OnBlackheath festival was a tale of two halves.

With beach balls and giant deckchairs, the festival site resembled a Mediterranean beach on balmy Day Two, while OnBlackheath was quintessentially English on drizzly Saturday.

By no means a washout, Day One’s weather saw yellow sowesters aplenty and no shortage of Hunter welly boots.

The music? Oh yes, that.  From opener Movin’ On Up, Saturday headliners Primal Scream took the crowd on a journey through their impressive back catalogue as well as playing new songs from this year’s Chaosmosis album. The Glasgow indie rockers followed Loaded with Country Girl – already a decade old – and Rocks.

There was clearly a Scottish slant to the weekend’s event, with acts from north of the border, including Glasgow’s Acrylic and the inspirational Edwyn Collins, dominating the festival line-up.

Hot Chip’s pounding main stage set on Saturday lifted energy levels.  The London band, who recorded their video for single Night and Day in nearby Charlton House just a few minutes from OnBlackheath’s Dartmouth Field, had a surprise up their sleeve as night fell, covering Bruce Springsteen’s Dancing in the Dark.
With revellers taking shelter in the site’s tents throughout Saturday, joyful DJ sets from Soul II Soul’s Jazzie B, as well as Neneh Cherry and Don Letts, pulled in the crowds.

On the main stage, the mid-afternoon grooves of Manchester’s LoneLady were swiftly followed by the playful Róisín Murphy.
Donning a hi-vis jacket and blue hard hat complete with flashing torchlight, she joked of plans to build her very own “Murphy Towers” skyscrapers on the green fields of Blackheath.

Sunday headliners Belle and Sebastian sent this year’s festival crowd home in fine fettle. With tales of Thatcherism and a topical dig at grammar schools, lead singer Stuart Murdoch played with an audience of all ages.

The Stars of Track and Field was dedicated by Olympics-obsessed Murdoch to the UK’s paralympic team.
Catchy opener Nobody’s Empire, from last year’s Girls in Peacetime Want to Dance, was followed by synthesised Jump to the Party Line from the same album.

Murdoch, following in the footsteps of James frontman Tim Booth earlier in the day, made friends with the front row. The sight of the next generation of James fans dancing to the likes of Getting Away With It and Say Something must surely delight the Manchester band.

Local heroes Squeeze’s Sunday afternoon performance with the Lewisham & Greenwich NHS Choir was one to savour. Tilbrook and Difford were joined by the choir of doctors and nurses, cheered on by families and friends, for four songs, including the appropriate and catchy Cradle to the Grave. Cool for Cats with a choir was a treat befitting of any of the festival’s many fine dining tables.