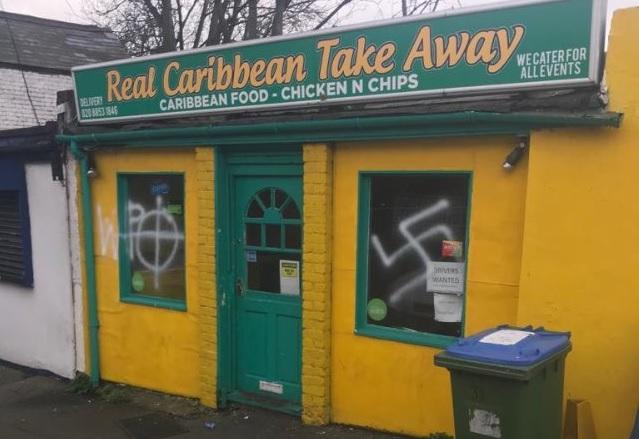 Residents in Greenwich and Blackheath are in shock following anti-Semitic graffiti, which was daubed on businesses over the weekend.

Council leader Danny Thorpe described it as the “most shocking and offensive” graffiti he had ever seen, with swastikas, messages supporting white power, and symbols depicting the Star of David, plastered on windows and brickwork in thick white paint.

Greenwich Council quickly confirmed it was aware of the incidents and as of midday it is understood the graffiti at the bank has already been temporarily covered up.

In a statement posted on Twitter, Greenwich and Woolwich MP, Matthew Pennycook, said: “Absolutely sickened by the anti-Semitic and white supremacist graffiti daubed on Barclays bank at the Blackheath Standard and other local shops overnight.

“I will not give the racists who carried out these disgusting acts the satisfaction of reproducing images of the hate they want to see spread in our community.

“I’m liaising with the Police and I’ve been up to the Standard myself this morning to check and the Council have already painted over the graffiti on the Barclays as a temporary measure until it can be permanently removed.

“These crimes are a stark reminder of the rise in white supremacism and Jew hatred in our country and, when it comes to the latter, of the need to never be complacent about the unique and constantly mutating form of prejudice that is anti-Semitism.”

A Met Police spokesman said: “Officers are investigating a report of anti-Semitic and racist graffiti on a bank on Vanbrugh Park which is believed to have occurred between 10 and 11pm on Saturday, 25 January.