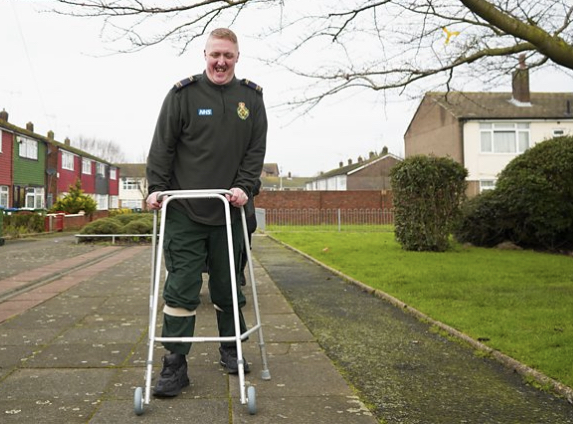 An emergency services call handler paralysed from the waist down is attempting a sponsored walk to raise money for the doctors and paramedics who helped him.

Sean Ash, from Bexley, who works at the London Ambulance Service’s (LAS) Waterloo HQ, will try to drag himself a mile for the emergency call-out’s charitable arm.

The 39-year-old father-of-four returned to work today after five months off since he was struck down by his paralysis.

“I am terrified but I will do my very best,” he said.

Sean suffered from a rare genetic condition called Cauda Equina Syndrome which weakened his spine – but he did not find out until a vertebra collapsed on August 15 last year, leaving him with paralysis below the waist.

He had been driving to his parents in Kent at the time. “I noticed while driving that I had pains down the side of my leg and my back started to seize up,” he recalled.

“I arrived at my parents’, got out the car and I couldn’t stand up straight. I asked my parents to run me a bath. I crawled up the stairs, my father undressed me and when I got in the bath pins and needles rushed down my legs.

“I got out of the bath and I couldn’t feel below my waist and lay naked on the floor.

“I called out for help and my son came, passing me my phone. I then called the ambulance service.

“I experienced back pain regularly, but never did I imagine that my disc would pop out and compress the nerve so badly that it would leave me paralysed.

“I read recently that Duncan from (the band) Blue also had this but had a luckier escape.”

He was taken to hospital in Margate, then transferred to King’s College Hospital where he had the discs removed.

His high potassium levels and heart issues meant there was a risk surgery could have killed him, but he pulled through.

The surgeons prevented him from any further paralysis, but he was left unable to move below his waist. He started to suffer with mental health problems and confesses he wanted to end his life.

He was transferred to Stoke Mandeville National Spinal Injuries Centre, where he underwent physiotherapy, hydrotherapy and saw a psychologist once a week.

“I was told that my injury was complete and there was very small chance that I would ever recover,” he said.

“I have worked really hard and done the near impossible by now being able to take some steps with my Zimmer frame.

“I have only ever walked a maximum of 10 metres, but I’m going to go the extra Mile because our NHS staff all go the extra mile for us.

“Working at the LAS has opened my eyes to the stress and difficulties that our NHS staff endure for us.

“I want to help to give something back and I hope you can all rally behind me as I attempt to pull off the impossible.”

He will try to walk the Xtra Mile for the LAS NHS Trust, over two periods.

He will walk with a Zimmer frame, wearing splints, with his wheelchair behind him for safety.