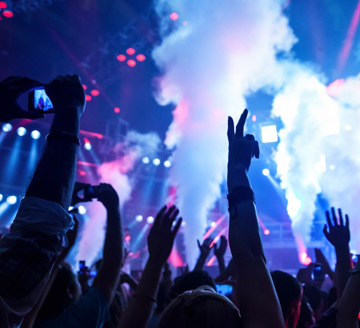 The weather was kind to OnBlackheath this weekend, writes Russ Handy.  So much so, that the undecided masses rolled up to buy tickets ad-hoc at the site’s Lewisham-facing main gate.

This, the last festival of the summer for Saturday performer Jack Savoretti, was the only dry UK festival he’s played. Pumped up and slick, the half-Italian got the picnic blanket crowd off its feet for his rocking mid-afternoon set. With one eye on the scores, football fan Savoretti spoke to Maritime Radio’s Russ Handy straight after coming off stage. Listen again here .

Hot on the heels of Savoretti was another singer-songwriter with an Italian link, Anna Calvi. Moody and captivating, Calvi’s filmic set was a show in itself as rain-clouds briefly threatened.

Manic Street Preachers had the Blackheath crowd on their feet, as picnic blankets were packed away. The Welsh band treated fans to a storming set which began with Motorcycle Emptiness, included Kevin Carter from their 1996 album Everything Must Go, and ended with the stirring Design for Life. Alone on stage mid-set, James Dean Bradfield serenaded the crowd with an acoustic Can’t Take My Eyes Off You. Welsh flags emerged while elsewhere, toddlers danced in fenced playpens and foodies dined on fine festival fodder.

The stage was set for Elbow and THAT hit. But instead of closing their appearance with One Day Like This, the Bury band, backed by stirring strings and brass, moved their most famous song to a much earlier slot.  Greeted by the sight of children on shoulders, lead singer and arguably the UK’s finest lyricist, Guy Garvey, joked how tall kids are getting down south.

Blackheath was not, he said, a dark, black heath. The jovial frontman had this Saturday night audience of all ages in the palm of his hand.