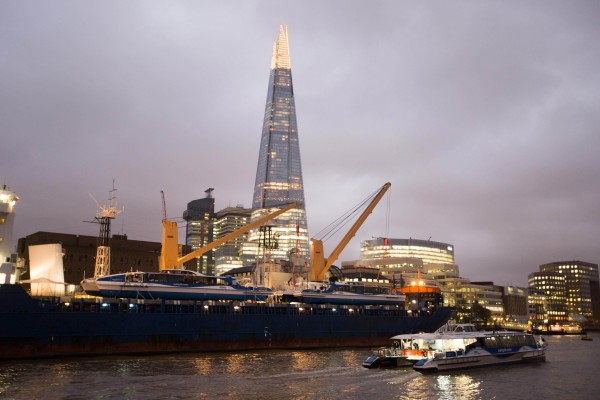 Two new Thames Clipper vessels have entered service this week and Maritime Radio was invited on board!.

The Galaxy Clipper and Neptune Clipper will join the current fleet of 13 high-speed vessels and are part of a multi-million pound investment by MBNA Thames Clippers service.

The two new high speed catamarans travelled over 15,000 miles from where they were built in Tasmania, Australia, arriving in London by ship, on their new home the River Thames.  They were seen sailing into London at the weekend.

The 150-passenger, 35m long ultra-high specification twin catamarans  are the first new boats to be added to the popular MBNA Thames Clippers river bus service in seven years. Specially-designed to be exceptionally lightweight and with a sleek hull format, the vessels will be the most efficient and technically advanced river buses on the Thames. They will add extra capacity to the service.

The new vessels are contributing to London Mayor Boris Johnson’s River Action Plan to double passenger trips on the Thames by 2020 In 2016 the Thames Clippers service is projected to carry in excess of 4.3 million commuters and visitors around London on the river.  By the end of 2016 MBNA Thames Clippers will have welcomed over 34 million people to its fast, efficient and comfortable river bus services since its inception in 1999.

Sean Collins, CEO and Co-founder, MBNA Thames Clippers said at the launch: “Just over a year ago MBNA Thames Clippers announced that we would add one new boat to the fleet to bring more commuting options to those travelling around London. Today I am very happy to declare we have in fact doubled on that promise with two new boats; Galaxy Clipper and Neptune Clipper.

“I’m the third generation of my family to work on the River Thames and it is with immense pride that I now see the river fulfilling its potential for the first time for passengers, like it did in its hay day for freight, as the essential thoroughfare in London.”

Godmother of the Galaxy Clipper, chairman of British Rowing and Vice Chairman of the British Paralympic Association, Annamarie Phelps, officially launched the craft, while Team GB rower Charlotte Taylor, had the honour of cracking the bottle to launch Neptune.

Transport for London (TfL) has also recently installed pay as you go Oyster readers across all piers served by MBNA Thames Clippers river bus services, and next summer will add contactless payment for the river bus service.

Mayor of London Boris Johnson said: “These fabulous, top-of-the-range vessels will make it even easier for Londoners and visitors to our city to get from A to B by boat. Along with the introduction of Oyster readers and a major investment at Plantation Wharf, the delivery of these stunning new Clippers show that it’s full steam ahead for travel on the Thames. Having grown from humble beginnings into a multi-million passenger carrier, MBNA Thames Clippers is a real story of success. By ferrying record breaking numbers of people they are not only playing a key role in our river renaissance, but helping to steer our economy in the right direction too.”

Galaxy Clipper and Neptune Clipper are the most technically advanced and energy efficient river and harbour fast ferries in the world. They have been designed to accommodate the unique tidal conditions of the River Thames and can cope with its low and high tidal conditions, allowing it to navigate its shallow reaches and pass under London’s famous but sometimes low bridges. The new boats boast design features such as additional roof windows that maximise opportunities to enjoy London’s iconic skyline and more room than ever to accommodate bikes.