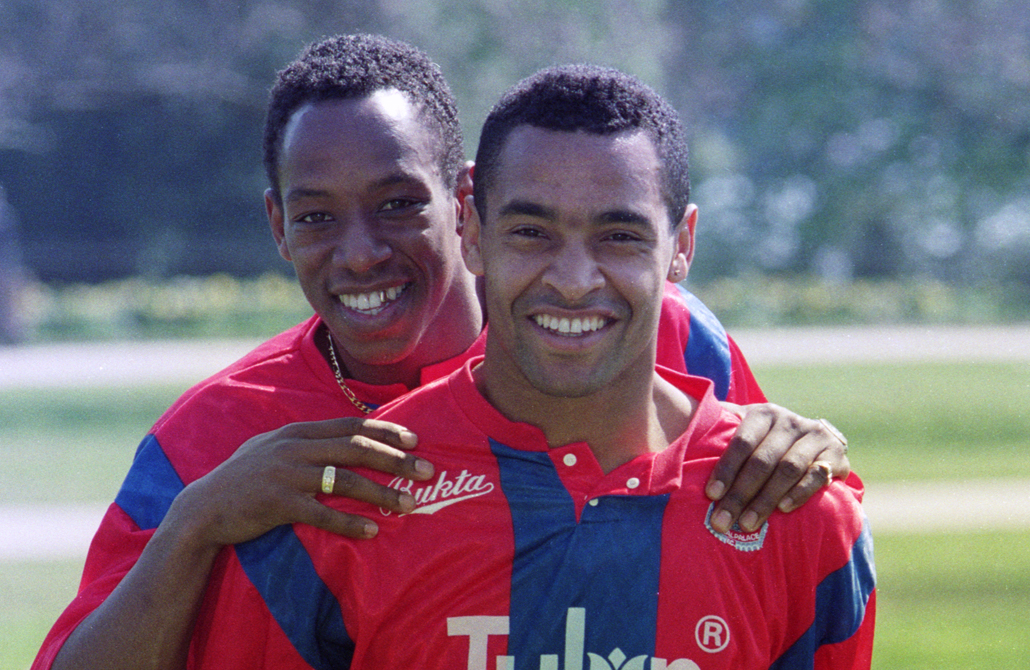 “I walked into the book store when mine was released and thought ‘my God, what’s going to make somebody buy my book instead of one of these?’”

Considering the challenges he has overcome and detailed in his chapters, it is perhaps a surprise that Mark Bright would find himself a little apprehensive.

But his book is different. It is not the typical autobiography of an ex-footballer. Going beyond tales of dressing room pranks and away day anecdotes, Bright documents his story with a painful honesty that explains his relief when readers connect.

Four months on from the book’s release, Bright is able to look back on his initial apprehension in the knowledge his story has been well received.

“It’s not a football book – football is just sprinkled in,” he said. “It’s a journey, a life story. Dalian Atkinson, Jlloyd Samuel, Cyrille Regis: a lot of people I knew have passed away recently. I wanted to tell my story, because you just never know what can happen.

“I thought it would be nice for my son to have an idea of my journey, and it’s hard to sit there and tell him everything.

“He hasn’t read the book yet. It won’t even be out of the packaging I sent it in knowing him! Everybody has told me he’ll read it in his own time.

“The biggest thrill is when someone recognises me and says they loved reading the book. That means more than anything, it makes you feel so good inside. It’s a feeling I never got from playing football, it’s totally different.

“I’ve had incredible messages, even from people I’ve known for a long time. They don’t know my backstory, because you don’t stand on a football pitch telling people you come from care. Everybody’s got a story – mine won’t be the worst, not by a long way.”

It’s a story of growing up with a white family in Stoke-on-Trent, after going into care at the age of seven with his brother.

Bright was two years old when his father went to drop him back home at the end of a weekend, only to find a note on the front door from his mother – ‘I’ve had my turn, it’s yours. I’m off.’

After several years of moving between homes, Bright and his older brother Phil found stability with a couple in Stoke, and it is a journey that shaped his childhood.

“Being in care takes away parenting – standing on the side of the pitch cheering on your child, parents’ evenings, school plays,” he says.

“All those things where your parents support you, I never had that. I was 18 the first time somebody said they loved me. I didn’t know what to say back, it was really awkward. It felt terrible.

“There are loads of people in care who must be wondering what the future holds for them. Hopefully the book inspires a few in terms of succeeding from a poor start in life.”

Moving between foster homes meant new schools and at Dove Bank Primary in Stoke, just a few hundred yards from their house, Bright and his brother were bullied daily.

Football provided some respite, a chance to show talent on a level playing field. And Bright remained convinced he would make it as a footballer throughout his childhood, even if those around him tried to urge caution. “Sport was massive growing up, it broke down barriers for me and made my life a little bit easier,” he said. “My brother and I got picked on at school because we were the only black kids and we would get chased home from school, having sticks and bricks thrown at us. That would happen every day.

“At break-time though, when we got the football out everybody could see I was good and they all wanted me on their team.

“All of a sudden, the tough guys took to you a bit and people start to like you because you’re good at football.

“I had a geography teacher, Mr Arkle, and he was so worried about me not having a back-up plan in life. He’d keep me behind and say I couldn’t put all my eggs in one basket and I’d tell him not to worry, I just wanted to be a footballer.

“He sent me a telegram on FA Cup final day all those years later – ‘Mark, I’m the proudest man in Stoke-on-Trent. I’m glad you realised your dream. Be a winner.’”

Among those who have reached out since the book’s release is Mr Arkle’s daughter, who revealed how her father had often told that same story and provided pictures to appear in the paperback release of the autobiography.

Bright admits his disappointment at having no stand-out defining success in his career, no winners’ medal to pass down to his son after losing two FA Cup finals and a League Cup final.

But there are success stories to be told, particularly his six years at Crystal Palace after a difficult spell at Leicester.

Manager Steve Coppell urged Bright to join the Eagles, detailing his plan for him to form a partnership with a kid from non-league who had all the enthusiasm and ability in the world.

Bright would form a formidable front-line with that non-league kid, Ian Wright.

“The move to Palace not only changed my football career, but my life,” he says.

“I was as low as you could get at Leicester, I couldn’t function properly because I had no confidence. I felt under pressure replacing Gary Lineker and it didn’t happen regardless of how hard I worked. But then I moved and I got that confidence. People were cheering me, and players were laughing and joking with me.

“I didn’t feel like the village idiot in the team, the one letting everyone down. You felt it was special and the crowds were great, even if it wasn’t always rocking like it is now.

“Whoever has owned the club has always made me feel very welcome ever since, and anything I can do for the club I try to do.

“The longer you’re retired, the better you were as a player – that’s what I’ve found! People talk to you like you’ve never missed a chance in your life.”

Having initially signed a three-month contract at Selhurst Park, few, including Bright himself, could have predicted he’d be involved with the club 34 years later.

He is the club’s director of U23 development and looking back on the season so far he believes the first team can be satisfied with their efforts, sitting 11th and just six points off fifth.

“It’s been a mixed bag of a season as usual, with highs and lows,” Bright says. “We came out of a tough period of fixtures and we got all these injuries. I know every team goes through it and that’s life, but we had it really hard.

“Ten first team players were injured – I don’t care who you are, that affects you.

“We’ve then had a nice spell of three 1-0 wins, and we felt that gave us a bit of momentum.

“Now like everyone else, we can’t get out. It’s a pity because we would have liked to have kept that little run going, but everyone’s health comes first. Liverpool are obviously in the toughest position and their fans are suffering the most. It would be horrific for their club and fans if we can’t complete the season and they don’t get crowned champions.”

The Premier League is currently suspended until at least April 30, but with the postponement of Euro 2020 it is hope that will enable the domestic calendar to be completed over the summer.

Bright believes the importance of a quick return to action on the pitch should be put into perspective.

“Steve Parish has said all the staff will stay on full pay, and football is really playing second fiddle at best,” he insists.

“It’s tough for players, but what’s tougher is not knowing if you’re going to have a job in a few weeks. It’s a desperate situation for so many people. The players won’t be moaning, because those people that sit in the stands and support them might not have jobs soon.

“That should be what they think about, because players have the luxury of knowing they’ll be getting paid. You won’t see the team feeling sorry for themselves or talking about wanting to play – there are just more serious things in life.”