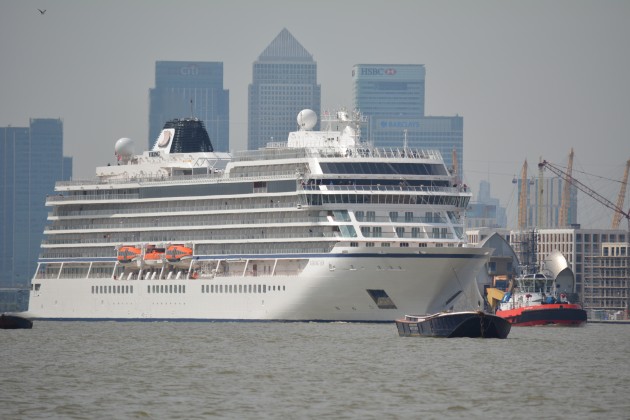 A luxury cruise ship has become the largest vessel to be christened on the Thames.

The 745ft long Viking Sea was christened in a ceremony in Greenwich on Thursday, with a fireworks display, the biggest of its kind to receive such a ceremony.

She was moored just metres from the iconic Cutty Sark.

It completed its inaugural voyage from Istanbul to Venice last month and arrived in Greenwich via the English Channel, Thames Estuary, the Atlantic Ocean and the Mediterranean and Adriatic seas.

Greenwich was chosen for the ship’s christening because of its impressive scenery and history, a Viking Cruises spokeswoman said.

On board, passengers can relax in a luxury spa with its own snow grotto while the ship is also equipped with three swimming pools, multiple restaurants and a theatre.

This afternoon, the Viking Sea slipped her moorings at 1pm and negotiated the Thames Barrier shortly after, assisted by two pilots, before passing through Woolwich.

The Danish registered vessel will now sail to Barcelona.

From next year, cruise ships will become a more common sight on the Thames, as a new cruise terminal is due to open at Enderby Wharf.  Once opened, the terminal will be able to accommodate any boat that measures up to 230m (750ft) in length, with a maximum passenger capacity of 1,600.  There has been some local resistance to the terminal, with some residents against it opening.