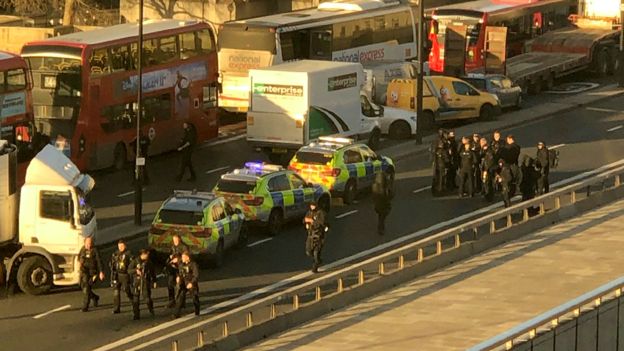 A number of people have been stabbed and a man has been shot dead by police in an attack at London Bridge.

The Met Police has declared the stabbing attack a terrorist incident.

The suspect, who died at the scene, was believed to have been wearing a hoax explosive device, police said.

Details are still emerging and Neil Basu, the head of UK counter-terrorism policing, said the force was keeping an open mind over the motive.

He said officers were called to a stabbing at a premises near the bridge just before 14:00.

Footage has emerged on social media of a man apparently being pinned down by members of the public.

Another man in a suit and jacket could be seen running from him, having apparently retrieved a large knife.

The members of the public then disperse and the man appears to be shot by police as he lay on the ground.

Mr Basu told a press conference: “A male suspect was shot by specialist armed officers from City of London police and I can confirm that this suspect died at the scene.”

British Transport Police said London Bridge station was currently closed and no trains would be stopping there.

Police have advised people near the scene to follow directions from officers on the ground. 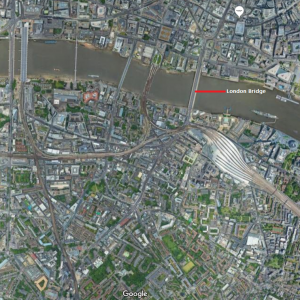 What we know so far

The Met Police said officers were called to a stabbing at premises near the bridge in central London just before 14:00 GMT.

A number of people have been injured, some seriously.

Videos on social media appear to show members of the public wrestling a man to the floor who then disperse before the man is shot by an armed police officer.

Another man in a suit and jacket can be seen running from him, having apparently retrieved a large knife.

A separate video has also emerged showing police officers aiming guns at a white lorry that jack-knifed across the bridge.

The footage shows several officers surrounding the vehicle before moving to the rear to check its container.