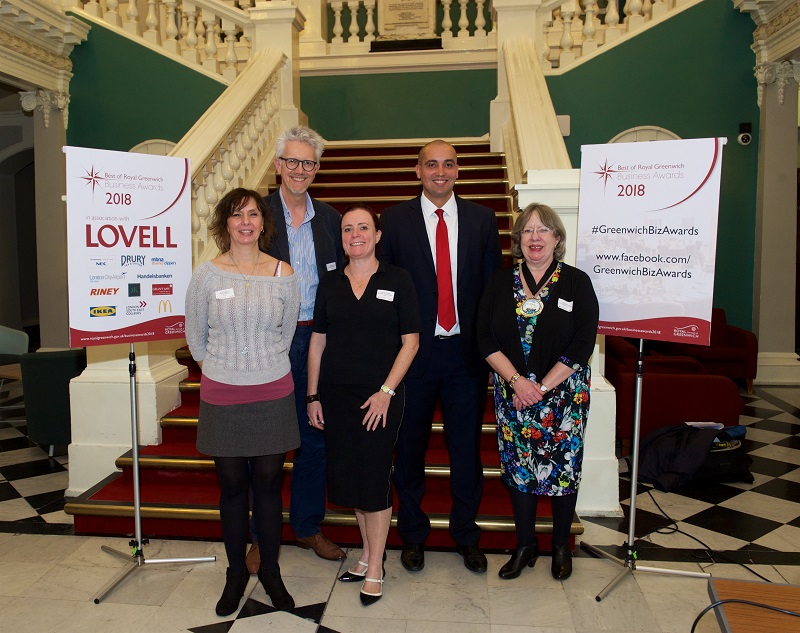 The judging line up for the Best of Royal Greenwich Business Awards 2018 has been revealed.
Five of the Borough’s leading businessmen and women will judge the entries, it was announced at the Meet the Judges event held at Woolwich Town Hall last night (1 November).

Alan Wright, founding partner of architects and planning consultants bptw partnership, offers over three decades of business acumen having led the practice’s emergence as experts in the residential sector regenerating urban areas to make them desirable locations to live and work.

Sarah Harris, manager of Hop Stuff Brewery and The Tap Room which has grown from a one man band to attracting £1.5m in investment within two years, will bring on the ground retail know-how.

Councillor Sizwe James, Cabinet Member for Transport, Economy and Smart Cities, will head up the panel and Helen McIntosh, President of South East London Chamber of Commerce and Fellow of the Chartered Institute of Public Relations, completes the line-up.

Businesses attending the free Meet the Judges event had the chance to ask the Council’s business engagement team for advice about their entries. They could also informally speak to the judges to benefit from their expertise and find out what they are looking for.

There was also an opportunity to network and speak to representatives from South East Enterprise, East London Business Place, South East London Chamber of Commerce and the Greenwich Cooperative Development Agency to benefit from their local and regional business support.

Davy’s Wine Merchants were announced as a further sponsor of the Best of Royal Greenwich Business Awards and will provide wine at the glittering awards ceremony on 19 January 2018.

It’s free to nominate your business for any of the 10 Best of Royal Greenwich Business Awards 2018 categories which include Innovation, Sustainability, Start-Up and Independent Retailer. Nominations close on 17 November.

Leader of the Royal Borough of Greenwich, Councillor Denise Hyland said: “I am delighted to have a talented judging line up of businessmen and women who have been chosen for being at the top of their game across a range of fields.

“The Best of Royal Greenwich Business Awards 2018 are a celebration of the Borough being home to many exciting and innovative businesses new and old so I would encourage all businesses to get their nominations in before 17 November. Being shortlisted or chosen as a winner would provide a big boost to your business and it’s free to enter if you pay business rates in Royal Greenwich.”

Discounted tickets are on sale for £35 per person thanks to the generosity of our sponsors, who have funded the whole awards ceremony. £5 from the sale of each ticket will be divided equally between the Mayor’s charities which are The Garrison Church of St George and Wide Horizons. This donation also buys you a raffle ticket which will be drawn by the Mayor at the awards ceremony.

Ticket holders will enjoy a champagne reception, sponsored by J.B. Riney, followed by lunch and the ceremony which will include entertainment by The Millennium Performing Arts College.
All of the awards have been sponsored by and will be presented by businesses who operate in and around the borough. The Council is particularly grateful to the headline sponsor, housing-led regeneration company Lovell.

For more information about the Best of Royal Greenwich Business Award including to book tickets or make a nomination visit the website here.