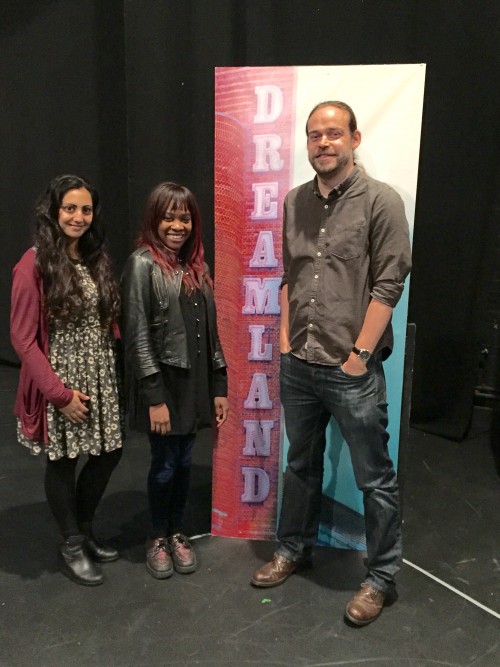 Hannah & Hanna by John Retallack at the Greenwich Theatre directed by James Hadrell, performed by CultureClash.

Walking into the Greenwich Theatre to 90’s pop music I was instantly transported back to my teenage years. The Dreamland signs, the colours and the fashion, all immediately set the scene.

Firstly we are introduced to Hannah, who has always lived in Margate with a loathing for the run down seaside town. Then we meet Hanna, who loves Margate and kissed the ground when she arrived in Dover from war torn Kosovo.  After some initial resentment from Hannah, the two teenagers eventually bond through a mutual love of singing and popular music. What follows is a rollercoaster of events that test the strength of their friendship.

Being a Kent girl myself, I was struck by how unaware I was about the conflict that took place in Margate. The play really highlights this, but on a far more personal level. You truly felt you were right in the middle of the action with the characters. The actors beautifully captured the scenes by portraying the people around them. As an audience member, you join them on a turbulent but wonderful journey of love, music and friendship that prevails.

A touching, important play which has significant relevance to the refugee crisis happening in Syria today.

Beautifully directed by James Hadrell, this is a play not to be missed.

What would I say is the moral of Hannah & Hanna? Prejudice has no place, humanity is home.

Hannah & Hanna enjoyed a successful run at the Edinburgh Fringe Festival. Hannah & Hanna is at the Greenwich Theatre until Saturday 3 October.

Don’t miss it. To book tickets go to the Greenwich Theatre website.

You can listen again to an interview with the cast and director here.