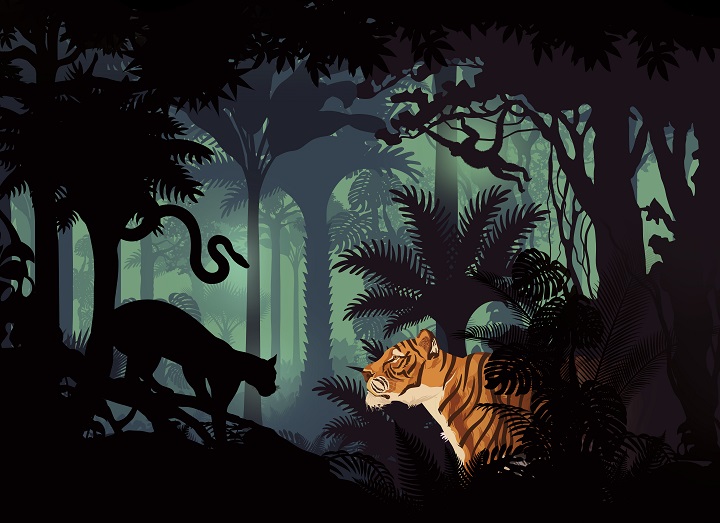 Greenwich Theatre is hoping to launch a summer tradition with the opening of their new production of The Jungle Book.

Written by Canadian playwright Tracey Power, this version of the story is much closer to the original novel by Rudyard Kipling than the Disney animated film.

“Whenever you mention The Jungle Book, the first thing that anyone thinks is The Bare Necessities,” said the show’s director James Haddrell.  “It is astonishing that the cartoon version has become such a huge part of our culture, but the original story is much darker than that. Mowgli does get lost in the jungle as a very young child, and does make friends with a whole host of animals, but there is also plenty of danger. Tracey’s stage version is definitely for families, but it doesn’t shy away from the threatening nature of Shere Khan, the scary erratic behaviour of the monkeys or the constant battle for survival that these animals all experience every day.”

For this production, the theatre has assembled an impressive creative team. Set and costumes are designed by regular Greenwich pantomime designer Cleo Pettitt with costume supervision from Sades Robinson. Movement direction, crucial to a show that brings the animals of the jungle to life on stage, comes courtesy of Sabina Netherclift, herself artistic director of Filament Theatre Company. Lighting design will be provided by Lizzy Gunby, who has lit acclaimed Greenwich studio productions and now moves up to the main house.

“It is important to us that this is not a two-dimensional cartoon world and everyone is working to make that a reality. Our jungle will be a dark, lush, noisy, dangerous world where Mowgli finds love and protection but where fear is never far away – and the characters all reflect that. In addition, our show has an exhilarating drum soundtrack which adds a whole new dimension to the world where a pack wolves takes care of a man-cub and defends him from the attack of an angry tiger. If this production is successful, I hope the Greenwich Theatre family summer show will become a regular feature here,” adds James.

This Christmas, Greenwich’s regular pantomime dame Andrew Pollard returns for the theatre’s first ever production of rarely performed panto title Robinson Crusoe, and the company has also reunited with Splendid Productions and Stantonbury Theatre for a second professional pantomime in Milton Keynes – Red Riding Hood vs The Wolf.

The cast of The Jungle Book includes Joseph Black, Antonia Elson, David Hubball, Serin Ibrahim and Kandaka Moore. The production opens in Greenwich on 15th August and runs until 26th August, when it transfers to Stantonbury Theatre, Milton Keynes to play from 28th August until 1st September.

Adapted for the stage by Tracey Power
Directed by James Haddrell