The Wolves of Willoughby Chase

The Wolves of Willoughby Chase 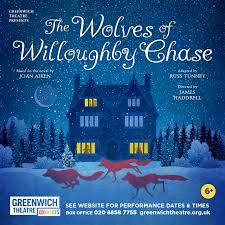 THE WOLVES OF WILLOUGHBY CHASE

A thrilling adventure set in an alternative history of England, The Wolves of Willoughby Chase tells the story of two brave and determined girls as they fight against ferocious wolves and battle their way through wastelands to defeat their very evil guardian, Miss Slighcarp.

This exciting, fun filled adaptation of Joan Aiken’s classic children’s novel sees cousins Bonnie and Sylvia and their friend Simon the Gooseboy encountering a host of unforgettable characters as they discover that the wolves roaming the forests and fields outside may not be as dangerous as the wolfish adults plotting inside…

Writer Joan Aiken won the Guardian Children’s Fiction Prize, the Edgar Allen Poe Award and was awarded an MBE for her services to children’s literature in 1999.

A magical, musical treat, this family production plays alongside our production of Pinocchio in a special new summer repertory season and is the perfect way to celebrate the return of theatre and summer in true theatrical style.

Suitable for ages 6 and up
Running time: 90 minutes (no interval)

What the reviews say:

“an utter joy… gripping, inspiring, original and, best of all, enormous fun… a tremendous piece of feel-good family entertainment…”
Greenwich Visitor on The Wolves of Willoughby Chase stream

★★★★★
“The adaption is very clever, the acting is of a very high standard… so perfect”
Mobile Theatre on The Wolves of Willoughby Chase stream

“Joan Aiken’s The Wolves of Willoughby chase is a masterpiece as far as I’m concerned. This classic had me gripped to the book, I literally couldn’t get away!”
The Guardian on Joan Aiken’s novel

“The story has all the ingredients of a rollicking children’s thriller; a gritty young heroine, absent parents, a wicked governess, an old mansion house with secret passages, moors inhabited by wolves and just enough unreality to make sure there are no nightmares at bedtime.”
British Theatre Guide on Russ Tunney’s adaptation