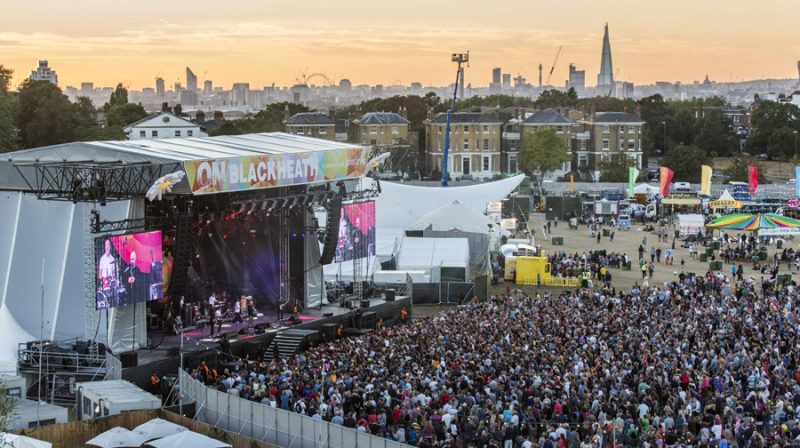 ONBlackheath is to return this summer between 13 – 14 July, with Jamiroquai and Grace Jones headlining the bill.

Jamiroquai will headline the Main Stage on the Saturday night as a UK exclusive. Since the band first emerged in the early ‘90s they have amassed a collection of accolades including 3 UK number one albums, Grammy and Billboard award wins, a Guinness World Record in 1997 for the bestselling funk album of all time with ‘Travelling Without Moving’, and huge chart success in just about every corner of the globe. Fronted by the dynamic J.K, the band who have an irresistible blend of house rhythms and ‘70s-era soul and funk and are certain to give fans an unforgettable live experience.

Throughout the history of music and fashion there has never been anyone else quite like the otherworldly Grace Jones who returns to ONBlackheath to headline the Sunday night. During the past four decades she has set the bar for popular culture in terms of originality and innovation. Her 1980’s critical and commercial hit albums ‘Warm Leatherette’, ‘Living My Life’, and ‘Nightclubbing’ altered the face of modern pop and paved the way for artists like Lady Gaga and Rihanna. As is expected with superstar Grace Jones, her headline show is set to be an extraordinary, chic and marvellous occasion.

One of Britain’s biggest reggae bands, UB40 featuring Ali Campbell and Astro, will be celebrating 40 years of global success this year and will perform again this year at ONBlackheath. Attendees can join in the anniversary celebrations with the band as they perform the biggest hits from their renowned back catalogue, including Red, Red Wine and Can’t Help Falling In Love. Two-time GRAMMY Award winner and multi-instrumentalist Jacob Collier also joins the ONBlackheath lineup, having undertaken a 200-date world tour last year and recently released his critically acclaimed album, ‘Djesse Vol. 1’.

Making a welcome return after a five-year hiatus, Morcheeba are back with their eclectic, cross-genre album ‘Blaze Away’. Skye Edwards’ soaring vocals, along with Ross Godfrey’s funk-infused grooves, will provide the perfect summer vibe against the stunning London backdrop. SG Lewis first shot to fame on releasing 2015 debut EP ‘Shivers’. The master producer has since gone on to collaborate with the likes of JP Cooper, AlunaGeorge and Col3trane. With a hotly anticipated album ‘Dusk, Dawn, Dark’ out soon, he’s sure to delight with glistening electro vibes at ONBlackheath this July.

Back To Life hit makers Soul II Soul will bring their seductive deep R&B that is grounded in soul, disco, reggae and hip-hop. Joining them are arguably Britain’s most successful reggae band Aswad, who’ll make the sun shine with classics including Don’t Turn Around, I A Rebel Soul and Shine.

Pioneers of the London acid jazz scene, Brand New Heavies, also join the line-up and will get festival-goers dancing with their funk-laden anthems, along with British duo Swing Out Sister who made a welcome return to the music scene last year with their delightful comeback offering, ‘Almost Persuaded’.

Family entertainment will be found at The Family Playground area at ONBlackheath. Kids are sure to have a great weekend with TV stars Mister Maker and Andy Day and his band Andy and the Odd Socks appearing in the flesh, as well as everyone’s favourite teddy bear Sooty holding his very own Birthday Bake-Off, presented by Bonnie Spencer. Also on-site at the Family Playground will be bestselling author Sam Copeland and Roald Dahl Funny Prize winner Jim Smith, along with masters of hilarity Comedy Club 4 Kids and The Flying Seagull Project.

Interactive musical fun will come courtesy of  Boppin’ Bunnies and The Pop Bingo Disco, along with some astonishing visual displays from The Science Museum and Samsam Bubbleman’s Giant Bubble Show. There’ll be lots of other family activities at ONBlackheath including the Science Museum’s slime workshops, interactive game zones with The Actual Reality Arcade and Albion Kids Show Soft Play and Pirate Ship, arts and crafts workshops with Daemon or Doppelganger? and Otherworld Arts as well as going up close with a range of extraordinary animals at Maynard’s Mini Zoo.

Street Feast, who run London’s day and night street food markets, will offer an array of food and drink at this year’s festival.  All you need to do is bring your appetite, which won’t be a problem for us at Maritime Radio!

Stay tuned to 96.5FM, as we will bring you more information on this event soon!