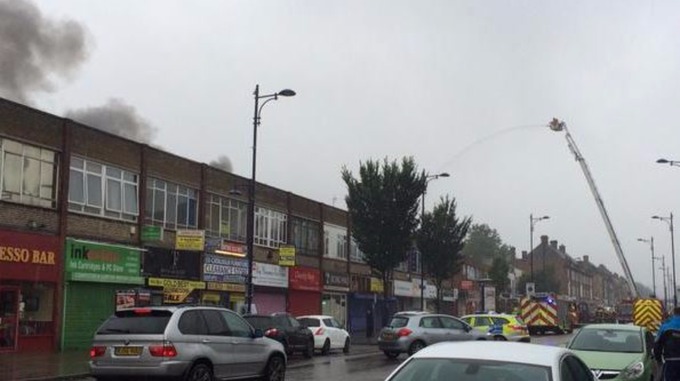 Ten fire engines and around 100 firefighters and officers tackled a fire at a pub in south east London which broke out on Monday morning.  The fire was at the New Cross Turnpike pub in Bellegrove Road, Welling, on Monday morning.

Seven people left the building before the brigade arrived and there were no reports of any injuries.

Around half of the first floor and most of the roof was damaged in the fire.

Station manager Martin Freeman said: “Staff at the pub had a lucky escape as they heard the smoke alarm sound, left the pub and alerted the brigade.

“I can’t stress how important smoke alarms are: you should have one on every floor of your property and test them regularly.

“Thanks to the alarm, seven members of staff were able to leave the building in good time but, had they not had an early warning, there could have been a very different outcome.”

The fire started at about 9.30am at the New Cross Turnpike in Bellegrove Road, Welling.

Police, fire and ambulance crews are on the scene and buses are being diverted.