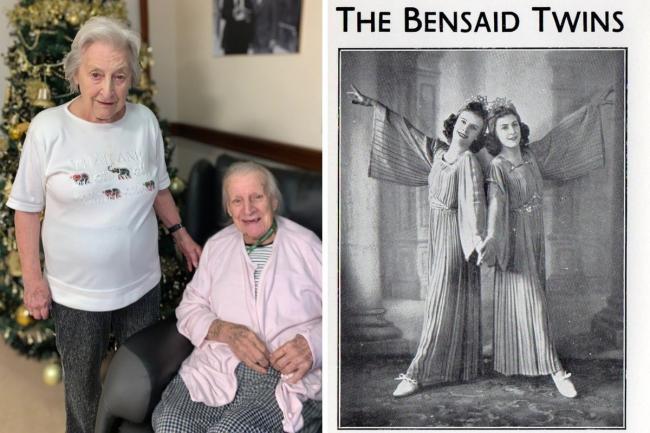 Twin sister entertainers who spent 70 years in show business performing with UK greats have been reunited in a Chislehurst care home.

Peggy and Mollie Bensaid, both 98, danced and performed acrobatics alongside Laurel and Hardy, Shirley Bassey and Tommy Cooper, carving an outstanding career as the only girl clowns in Britain after WWII.

Mollie came to stay at Home Prince George Duke of Kent Court for respite care last month and to spend time with her sister, who moved in last October.

“It was so lovely to see them back together, and we hope they can be reunited soon again.

“Peggy and Mollie are both full of personality and really make the staff laugh.”

The Bensaid twins started performing as teenagers, when they joined a youth dance troupe.

Later, Peggy and Mollie went on to be recognised as Britain’s leading twin act, and their performances were a hit in many theatres and summer camps across the UK.

During the Second World War, they toured the country and, as morale-boosting entertainers, worked for the troops and the American Red Cross on many occasions.

After the war, the twins were the only girl clowns in Britain, and that unique status allowed them to perform and travel all around the world.

Peggy and Mollie had an eventful career and neither sister married. Once they retired, the twins wrote a book, All The World’s A Stage, where they recall joyful anecdotes and also reflect on their long-lasting and successful career.

Peggy came to live at Prince George Duke of Kent Court in October 2020, where she enjoys music therapy sessions. “It is really nice here; I’m feeling safe and well!”, she said.

As the sisters have always been inseparable, their time together during the Christmas period has been significant to both of them.