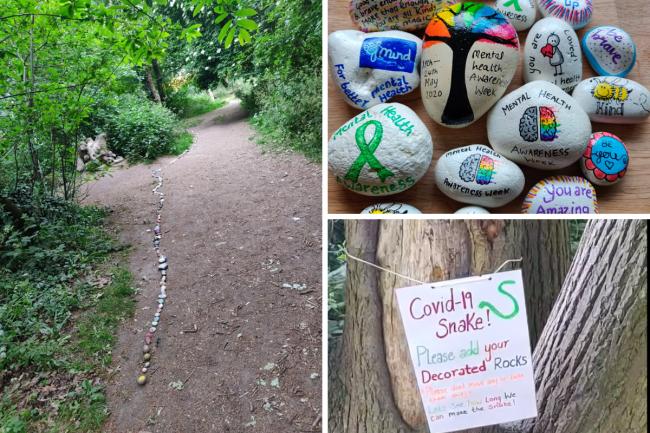 A snaking trail of over a 100 brightly painted rocks have appeared in the woods of Bexley, part of a new spontaneous craze capturing local people’s imagination and community spriit.

‘Covid-19 snakes’ made out of specially decorated rocks have cropped up in Bursted Woods and Bexley Woods and appear to be a hit with the community, with keen children and adults adding to the creative project every day.

Painted rocks has been a growing tradition nationwide for some years now, with hundreds of people locally painting/decorating small stones with any chosen design, and then hiding them in nearby woods for others to find.

The hobby has taken on a new meaning during the coronavirus pandemic though, with people now adding their own painted rocks to a winding snake of rocks, first started in Bursted Woods but now spreading.

Started by Barnehurst resident Lea Hebblewhite, the Bursted Wood snake of stones has already grown over 100 in size, one week after its creation.

The 43-year-old said she had been painting rocks for years now, but the lockdown had given her a good reason to properly get back into it, and she decided to put the first few rocks down.

“I’d seen the project elsewhere online, and I thought it was a lovely idea.

“I thought why not start one in Bursted Woods, lots of people go there for isolation walks or bring the family in search of hidden painted ricks.

“The snake is quite depending on everyone helping, adding to it without taking some away, but it’s just grown and grown during the week.”

Similar snakes have appeared in Oxfordshire and Brighton, encouraging local communities to work together, despite the social distancing rules in place.

“It’s brilliant to see the videos and pictures of families and children looking so excited when they find the snake or one of the hidden rocks,” Lea told the News Shopper.

“They seem to love the snake, its really caught on.

“I go there every morning, and it’s lovely to see so many lovely drawings and nice messages about our key workers, from hospital staff to bin workers.”

Lea herself has used painted rocks to fundraise during lockdown, introducing social isolation rocks which can be given to those we’re currently unable to see.

Denny, just six, suffers from ALL leukeamia, and his last chance is to make it to the US for enrolment onto Car-T therapy, for which he requires £500,000 in funding.

The fundraiser is nearing its target, and if you’d like to donate or find out more click here.

The stones can be designed at home and are decorated with colours, animals, drawing and often messages such as ‘Thank you NHS’.