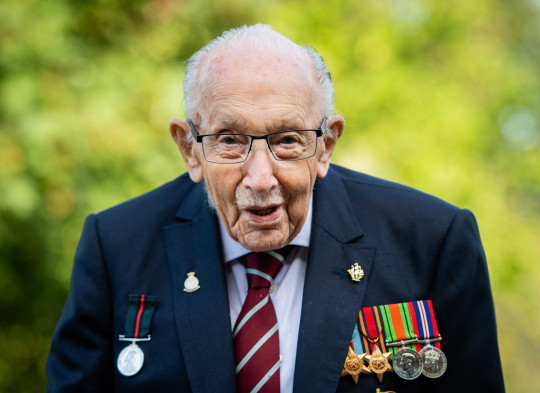 Tributes led by HM The Queen and Prime Minister have been pouring in following the news that Captain Sir Tom Moore, the NHS fundraiser who inspired a nation in lockdown, has sadly died in hospital aged 100.   He was admitted to Bedford Hospital on Sunday, 31st January and had been suffering from pneumonia and Covid-19.

The Queen is sending a private message of condolence to the family but added ‘Her Majesty very much enjoyed meeting Captain Sir Tom and his family at Windsor last year.  Her thoughts and those of the Royal Family are with them’ and Prime Minister Boris Johnson tweeted ‘Captain Sir Tom Moore was a hero in the truest sense of the word.  His legacy will long live after him.’

Sir Tom’s daughters Hannah Ingram-Moore and Lucy Teixeira released the following statement: ‘It is with great sadness that we announce the death of our dear father, Captain Sir Tom Moore. ‘We are so grateful that we were with him during the last hours of his life; Hannah, Benjie and Georgia by his bedside and Lucy on FaceTime. We spent hours chatting to him, reminiscing about our childhood and our wonderful mother. We shared laughter and tears together. 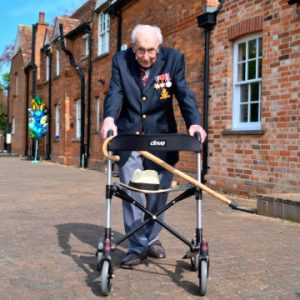 ‘The last year of our father’s life was nothing short of remarkable. He was rejuvenated and experienced things he’d only ever dreamed of. ‘Whilst he’d been in so many hearts for just a short time, he was an incredible father and grandfather, and he will stay alive in our hearts forever.’ The statement added: ‘The care our father received from the NHS and carers over the last few weeks and years of his life has been extraordinary. They have been unfalteringly professional, kind and compassionate and have given us many more years with him than we ever would have imagined. ‘Over the past few days our father spoke a great deal about the last 12 months and how proud he felt at being able to leave behind the growing legacy of his Foundation. ‘We politely ask for privacy at this time so we can grieve quietly as a family and remember the wonderful 100 years our father had. Thank you.’

Sir Tom became known and captured the nation’s hearts because he was determined to walk 100 laps round his garden before turning 100 last April.  Originally he wanted to raise £1,000 to support the health service but his mission went international and praise and donations poured in, taking his final total to £32.7 million.  Acknowledging his efforts, he was knighted by the Queen during a unique open-air ceremony at Windsor Castle in summer 2020. The millions of pounds raised by Sir Tom funded a range of projects providing practical and emotional help to NHS staff and volunteers. NHS Charities Together said health service charities have used some of the money to assist those experiencing bereavement due to Covid-19. The organisation said it has helped patients, their families and carers at one of their most isolated and stressful moments, when they are very ill in hospital and separated from those they care for.