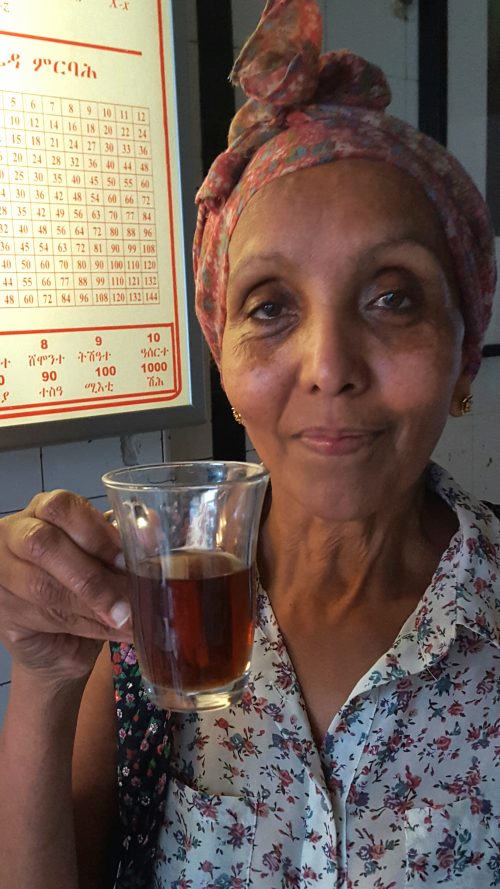 This week, we dined out at The Blue Nile in Woolwich and met owner Shewa Hagos.

Shewa is from Eritrea and arrived in the UK in 1982 as a refugee.

The Blue Nile occupies premises which were once a butchers shop and then later a sandwich shop.  When Shewa took over, she set about removing the false ceiling and panelled walls to restore the building to it’s traditional appearance.

On 26th April, 1946, a tram crashed into the building which was then Geller butchers.

Shewa serves Eritrean food, and recommends the Bebiaynetu, which is three vegetable stews and two meat stews served on Injera.  Injera is best described as a large, round pancake, made from a high-fibre, gluten-free grain with a slightly sour taste and a soft, spongy texture.

It is served flat with a variety of curry-like stews and salads spooned over it. A large plate of injera is shared amongst a group and eaten without any cutlery, making the meal a sociable and fun experience.  It tastes delicious and is very healthy!

Shewa has customers who come from miles to try her food and told us recently of a couple on the way back to Hawaii who risked missing their flight, just so they could come and sample the menu!  The Blue Nile is frequently voted as one of the best restaurants in London.

Find out more about the Blue Nile, on their website.