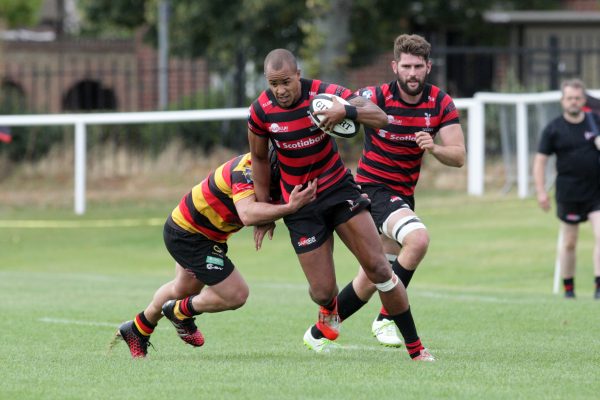 Pre-season friendlies can give a misleading guide to the campaign ahead, but it’s hard to argue against three wins from three matches, all achieved at the expense of higher league opposition.  In addition, to come from arrears and claim such an emphatic victory against a Richmond side who defeated Blackheath home and away en route to promotion last term, left a particularly warm feeling around Well Hall.

Without doubt it was the Championship club who started with more purpose, keeping the hosts pinned in their own territory for the opening half-hour with some useful line-kicking, and eventually breaking down some stiff resistance, to score through blind-side Tom Sargeant and fly-half Rory Lynn – former Clubman Freddie Gabbitass, who made the move across south London during the summer, adding both conversions for a 14-0 lead.

However, Tom Stradwick and Gregor Gillanders quickly put Tom Chapman in enough space on the left-wing to outsprint the cover, reducing the deficit to nine points at the break.  And as Matt Corker was sent to the sin-bin for impeding a quick tap-penalty at the start of the second period, Jack Walsh broke from a maul to cross the goal-line, and Jamie Davies stormed up from full-back to make light of some Richmond tackling for a third score, giving Blackheath the lead.

Now it was the hosts with the territorial upper hand, and as the visitors’ discipline faltered, Walsh claimed his second try after strong running in midfield from Geoff Griffiths, and Harry Fry dived over from a maul to complete the scoring.

‘Turning around at the break we were confident,’ said Club director of rugby Colin Ridgway.  ‘Our defensive strategy worked well in restricting Richmond to a 14-5 advantage and the wind was now in our favour and would hamper their kicking game.’

‘With the serious stuff starting next Saturday, we challenged the boys to step up their intensity and they responded, sticking to the game-plan, executing our patterns and scoring five well-constructed tries.’

‘It’s been a good pre-season, we’ve shown commitment, maturity and good spirit, and although you can’t read too much into the results, indications are positive.’

Blackheath’s National League One campaign begins with a trip to Hartpury College next Saturday before the Club return to Well Hall on 10th September for the visit of Esher and their first league match at their new venue.

There was further cheer for Blackheath yesterday as the Heathens moved into the second round of the Kent Cup after beating Dover 24-11 at The Crabble.