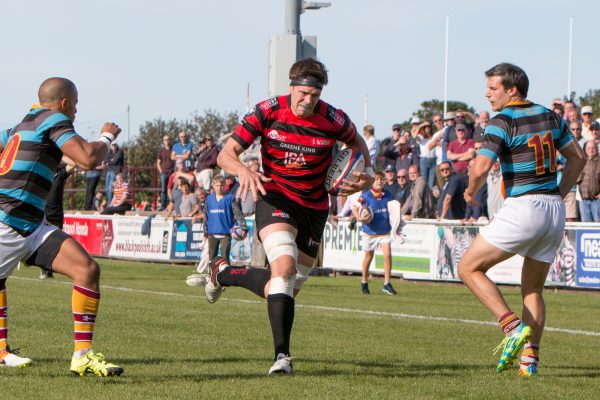 After four consecutive defeats, a second win at the Woodlands Memorial Ground in a matter of months, and this one by the smallest possible margin. Like they’d done back in April, Blackheath led for a majority of the game, but Fylde’s ability to strike from almost any situation is well documented and, outscoring their guests by four tries to three in this contest, came perilously close to overturning the lead and claiming their first victory of the season.

In fact for the opening half hour Fylde were the better side, demonstrating far greater accuracy and operating off a smoothly executed line-out. Leo Fielding gave Blackheath the lead with three points after an early drive was killed on the hosts’ goal-line, but within moments the excellent David Fairbrother, around whom much of Fylde’s game revolved, was rampaging forward from his own half of the field, before Greg Smith came up in support of his number-eight to finish the move, the fly-half adding the simple conversion.

A quick tap penalty came close to exposing Blackheath again, while at the other end Fielding rattled the upright with another penalty attempt, but Aston Croall’s dominating performance at loose-head in the set-scrum began to give the visitors the ascendancy, and as Tom Baldwin took line-out ball on 36 minutes, and Markus Burcham made an arcing run towards the left corner, Chris Knight crashed over for his first try in Club colours and a 10-7 interval lead.

Blackheath showed some expert handling of their own from the re-start. Geoff Griffiths made the initial break down the left touch-line, before ball sped through a number of hands to the opposite corner for Baldwin to score, and with Fielding adding a second conversion from out wide, followed by another penalty, the visitors moved 13-points clear.

Nevertheless, Fylde upped the tempo once again, and as the penalties amassed against the visitors, their defence ran out of numbers to create space for centre Anthony Bingham to cross. And just after the hour mark, a fine break and off-load from wing Ollie Brennand set up a try for Fairbrother, reducing the deficit to just three points.

Blackheath stretched out again in the 70th minute as Fylde misjudged a high ball and Knight collected on the bounce to put Burcham away down the right flank, but the Lancastrians also benefitted from some good fortune soon after as a move down the Club three-quarter line ended with ball in the hands of Scott Armstrong, the wing sprinting away for his side’s four-try bonus point, but leaving them just short.

Next Saturday Blackheath return to Well Hall in Kidbrooke Lane for the visit of Coventry. Kick-off is at 3.00 pm.