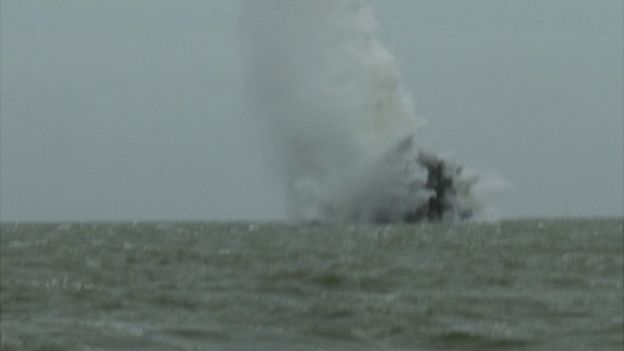 An unexploded World War Two bomb found near London City Airport at the weekend has been detonated.

The 500kg device was discovered at the King George V Dock on Sunday during planned work at the airport.

The airport was closed as a precaution and all flights were cancelled on Monday after an exclusion zone was put in place.

The detonation, which took take place off Shoeburyness, Essex, was postponed on Tuesday because of high winds and dangerous conditions for divers.

Watch the moment the bomb was finally detonated

The 1.5m-long German bomb – which was found in a bed of silt, 15m underwater – was carefully removed from the Thames and placed in a secure location a mile away from the coast of Essex.

London City Airport returned to “business as usual” on Tuesday.

The Ministry of Defence (MOD) said since 2010 it has been involved with 450 “items of German WWII air delivered ordnance” – about 60 per year.

It estimates 10% of the bombs dropped over the UK did not explode during WWII. But given the lack of data it’s impossible to say how many more remain undiscovered.

Most of the bombs are buried deep and are often initially discovered by construction workers. It is therefore very unlikely for members of the public to stumble across one.

Only a very small fraction of these discoveries ends up in the news. The ones that do appear in the headlines tend to be particularly large devices.

London City Airport is the fourth 500kg bomb the MoD has dealt with in the last 15 months.