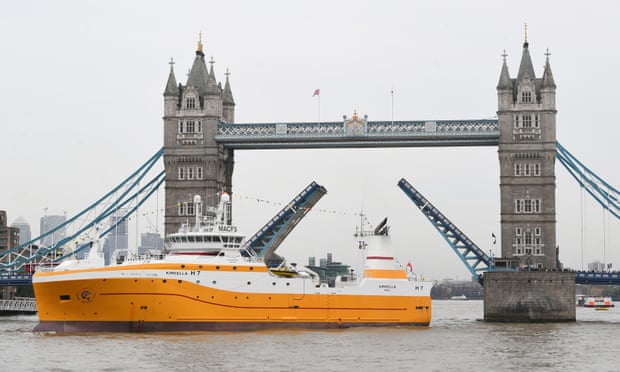 The biggest whitefish trawler in the UK fleet sailed up the Thames earlier this week, to Greenwich, where she will be named on Wednesday.

The Kirkella, based at Hull, can catch 2.3 million fish on every two-month voyage, plying the seas of the Arctic, Greenland, Norway and the north-east Atlantic.

Built last year, it has travelled to the Arctic five times so far, and on Wednesday it will be officially named and launched by the Princess Royal here in Greenwich. Spectators will be treated to 3,000 free portions of fish and chips.

There are concerns in the UK fishing industry of the effects post Brexit.

Barrie Deas, chief executive of the National Federation of Fishermen’s Organisations, said: “Access to our markets is a source of leverage, but it is up to the government to use it. The common fisheries policy has allowed EU fleets to catch six times as much fish in UK waters as we take out of EU waters. It is asymmetrical.”