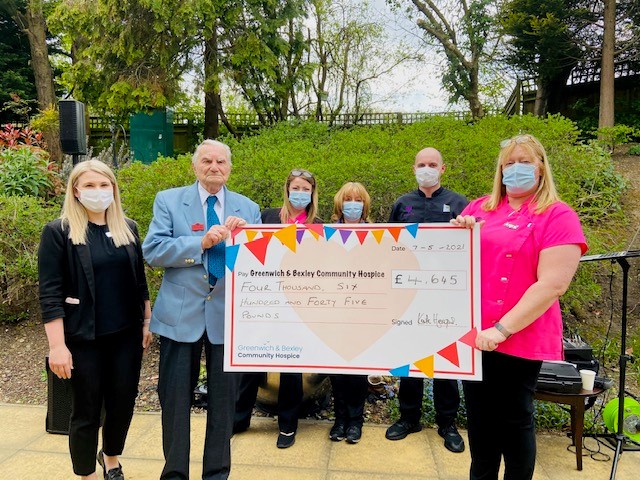 The Chief Executive of a local hospice has paid tribute to a 103 year old Bexley man for his fundraising effort.

Kate Heaps, from Greenwich & Bexley Community Hospice, paid a visit to a special local resident last week to say a big thank you for his unbelievable fundraising efforts in support of the local charity.

Tom Jones (not the singer) who is from Bexley, has raised over £4,600 for the Hospice by walking more than 550 laps of the garden at his care home in Groveland Park, Bexleyheath. Tom was originally inspired by the achievements of Captain Sir Tom Moore and set himself a challenge to raise £103 for the Hospice on his 103rd birthday but his target was easily exceeded in the first day.

During her visit, Kate spent time with Tom and thanked him for his extraordinary achievements. He was also shown a heartfelt video of thanks from the staff at the Hospice.

Kate Heaps said “I wanted to thank Tom personally for his amazing and selfless efforts. We are touched that he chose to spend his birthday walking laps of the garden for the Hospice. He is a great example of what the Hospice is all about. Knowing that there are people like Tom out there supporting us and putting other people first motivates us and keeps us going through these challenging times and the money that he has raised will help us to continue to support and care for the people in our community who need us. We are so impressed and so very grateful. “

Tom said “Living in Groveland Park, makes me realise how incredible lucky I am, and living in the Bexley borough all of my life I wanted to give a little bit of something back, which is why I chose to walk laps of our garden to raise some money for Greenwich & Bexley Community Hospice who have supported Groveland Park over the years.”

The Management Team at Groveland Park said “All of us at Groveland Park are immensely proud of Tom and what he has achieved. Tom is the epitome of a true gentleman and he brings so much joy and character to our home. To commit to such a challenge at the grand age of 103, and to have raised the incredible amount of money that he has for the Greenwich and Bexley hospice only amplifies what a true inspiration he is to us and to so many.”

Every year, the Hospice needs to raise £5 million from donations, fundraising and retails sales to fund its vital care and support services. Like many other charities it was heavily affected by the impact of COVID-19. The closure of its retail stores and the curbing of its fundraising capabilities through 2020/1 has made this challenge harder in the current climate and it is the efforts of local heroes like Tom that make all the difference. A big thank you, Tom.

Although Tom has now completed his walk, you can still sponsor him via his GoFundMe page. Visit the Groveland Park website and search for Tom Jones Charity Walk, for more information.